Léon Leyritz original signed gouache on cardstock for his friend Maurice Ravel's Bolero at the Opėra Garnier 1941, by Serge Lifar with Suzanne Lorcia as first dancer and Lifar's partner.

Léon Leyritz first trained in Paris at the Bernard Palissy municipal school where he obtained an award in 1903 . He was a pupil of Jean-Paul Aubé , then, from 1906, of Antonin Mercié at the École des beaux-arts in Paris.
He won the Chenavard Prize in 1914.

After the armistice , around 1920, he sculpted the model of a statue of a hairy man which was produced in numerous copies by the Durenne foundry and which served as a figure for war memorials of the First World War.

In 1926, he created the storefront for the florist André Baumann using Lap blue panels at 96, boulevard du Montparnasse in Paris. In 1928, 1929 and 1930, he participated in exhibitions of works in Lap in Antony.

Léon Leyritz is best known for his friendship with the composer Maurice Ravel , from 1927 until the musician's death in 1937, and for the bust he made of the musician . It was their mutual friend, the soprano Marcelle Gerar, who made the presentations between the two artists: “Having met Ravel at my house, Léon Leyritz expressed his strong desire to make the image of the Master. I acted as an intermediary, and the answer was: - I am willing on condition of never asking ... It was a challenge, the sculptor held it. He was however allowed to take some sketches while Ravel was rehearsing his Sonata with Asselin ” .
The bust of Ravel by Leyritz was inaugurated onJune 10, 1928 at the composer's home, during a party organized by Marcelle Gerar and known as L'Impromptu du Belvédère .
According to the singer, the composer declared: “This is my best portrait! " .
Ravel confirmed his judgment in 1930 when he requested that a photograph of the bust be published in the program of a concert in Biarritz , in addition to a photograph of another bust of him made in 1928 by the niece of Gabriel Astruc , Louise Ochsé : “You will also receive the photo of my bust by Leyritz. We will put them both on the programs: there will be something for everyone, even for mine ” .

In 1932, Ravel declared in an interview with José Bruyr : "it is still Leyritz who made me the most like". On December 28, 1938, a copy of the bust was inaugurated in the foyer of the Paris Opera by Minister Jean Zay to mark the first anniversary of the composer's death.

In 1930, Léon Leyritz, assisted by Claude Coquerel, carried out the “liner” style decoration of a pied-à-terre apartment by Maurice Ravel in the building owned by his brother Édouard Ravel (1878-1960) in Levallois .
In 1932, an armchair designed by Leyritz for Ravel was exhibited at the 22nd Salon des Artistes Décorateurs at the Grand Palais as reported by Gaston Varenne :“The aluminum armchair executed by Leyritz for composer Maurice Ravel, it seems, is often misjudged by disrespectful audiences. I heard it compared to a chair to be electrocuted! I appreciate more the fantasy deployed by the same artist in his fountain of shells. It introduces a very funny note in the cool room, in rockery, imagined by Coquerel, for the basement of a country house ”.

In 1933, Léon Leyritz accompanied Maurice Ravel, diminished by a neurological disease, to his friends Meyer in Le Touquet.

In February and March 1935, at the initiative of the dancer and ballet director Ida Rubinstein , Léon Leyritz accompanies Maurice Ravel, more and more seriously affected by the disease, on a trip to Spain ( Madrid , Seville ) and Morocco ( Marrakech , Télouet , Fez ) via Saint-Jean-de-Luz. After this trip, in 1936, Léon Leyritz produced a model set for the Boléro with an oriental palace in the foreground, reminiscent of Télouet's and, in the background, a factory with several chimneys reminiscent of a factory in Vésinet.. This decor corresponded to the composer's desire expressed in an interview in 1933: “As for my Bolero , I owe it to a factory for having designed it. One day, I would like to give it away with a vast industrial complex in the background ”. InDecember 1941, four years after the composer's death, the Boléro was performed with Leyritz's set at the Paris Opera.

In 1947-1949, Léon Leyritz was one of the founding members of the Maurice Ravel Foundation .
In 1959, in the name of Ravel's brother, he provided decorations and objects for the composer's apartment in Levallois in the City of Levallois.
In 1975, for the centenary of Ravel's birth, he loaned documents to the National Library of France for the needs of a major Maurice Ravel exhibition (photographs, portraits of the composer and of his friends and performers. last, sets), he appeared in the documentary film Maurice Ravel. The man and the spells by Danblon and Alain Denis.

Léon Leyritz, without descendants, married in Paris on May 23, 1912 first marriage with the painter and sculptor Jeanne Hélène Vesques (1885-1940) with, among the witnesses, the three sculptors Jean-Paul Aubé , Laurent Marqueste and Antonin Mercié.
August 14, 1944, he married for a second time in Paris to Andrée Chéret 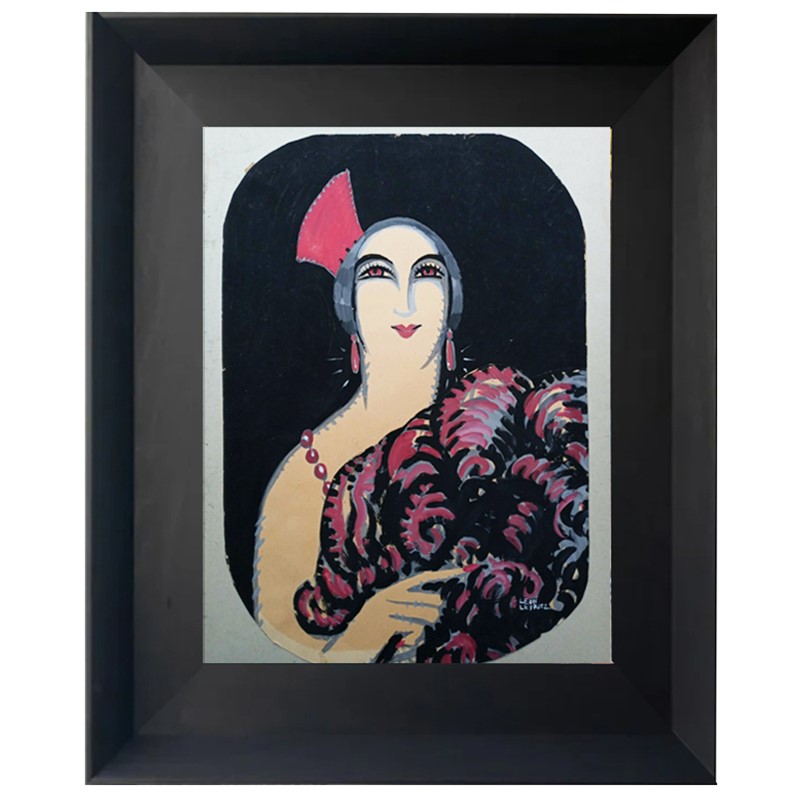