In 1874 Ludvig R. Poulsen set up a wine importing business under the name Kjøbenhavns direkte Vin-Import-Kompagni (The Copenhagen Direct Wine Import Company). The firm closed down in 1878. In 1892 Ludvig Poulsen opened his second business, this time selling tools and electrical supplies. In 1896 Ludvig R. Poulsen hired his nephew, Louis Poulsen. Ludvig R. Poulsen died in 1906. His nephew Louis takes over the business and, two years later, moves it to Nyhavn 11. In 2019 the headquarter moved to Holmen, in Copenhagen, which is the company's head office location today. Five years later, Sophus Kaastrup-Olsen became a partner in the firm, whose name was changed to Louis Poulsen & Co. In 1914 Louis Poulsen & Co. published its first catalogue – featuring machines and tools. In 1917, Sophus Kaastrup-Olsen bought Louis Poulsen's share in the firm for 10,000 Danish kroner and became the sole owner of Louis Poulsen & Co.

Designer Poul Henningsen began working together with Louis Poulsen in 1924, with a view to taking part in an international exhibition for decorative art to be held in Paris called "Exposition Internationale des Arts Decoratifs & Industriels Modernes". A competition was held to find qualified participants: Henningsen was one of the winners. Next year, Poul Henningsen's lamps earned Gold medals in this exhibition.

In 1926 Louis Poulsen and Poul Henningsen were awarded a contract to provide lighting for the newly constructed Forum building in Copenhagen using the now-legendary PH lamp with three shades system.

Louis Poulsen starts marketing light fittings, and its first lighting catalogue is published with descriptions in Danish, German, English and French. In 1941, at the time of World War II, Louis Poulsen & Co. A/S acquires the Laurits Henriksen metal goods factory in Copenhagen and becomes a manufacturer of lighting fittings.

Henningsen designed a blackout lamp for the Tivoli Gardens in Copenhagen which allows the Gardens to stay open until midnight: the light from the lamps cannot be seen from aeroplanes flying over the city.

Fully re wired with modern electrical components, some light patina to the chrome and white paint on the shade. The shade part has some slight mis shaping causing a slight uneven part on the lower shades. Also it has some scratches to the chrome foot. 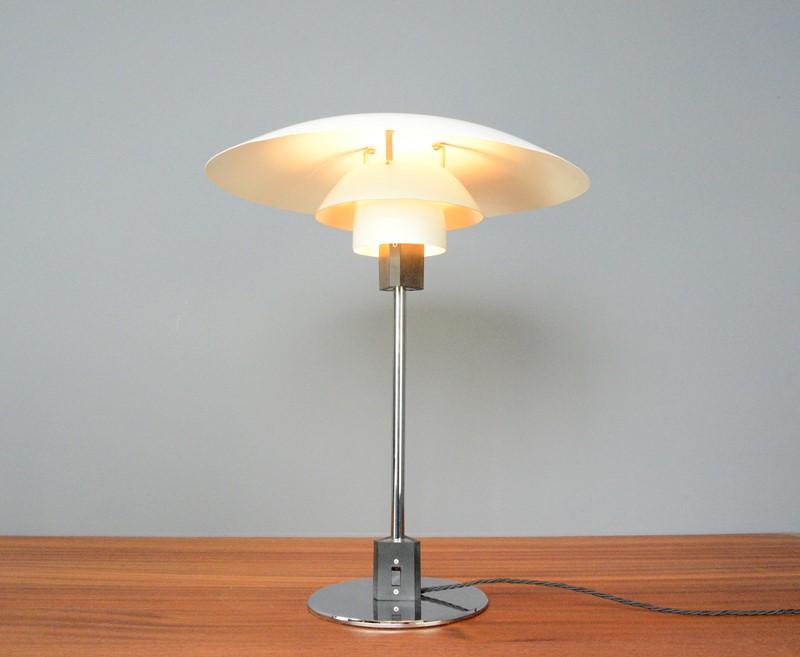